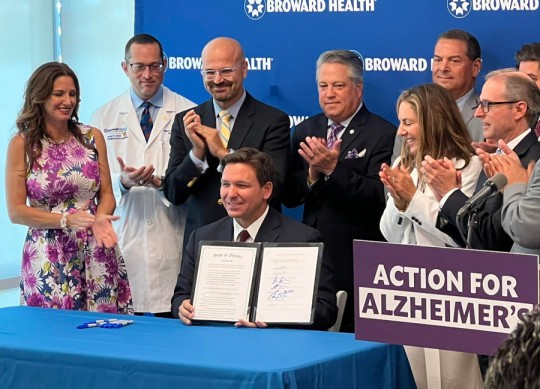 Gov. Ron DeSantis highlighted record funding for Alzheimer’s disease as he signed a senate bill to establish the Ramping up Education of Alzheimer’s Disease and Dementia for You (READY) Act.

Additionally, the Governor announced that the final pillar of the five-part Dementia Action Plan, created in 2019, has been fulfilled with the establishment of the Florida Alzheimer’s Center for Excellence.

The Florida House version of the READY Act was filed by District 1 Rep. Michelle Salzman.

“My legislation will require community health clinics across the state to educate their patients on the signs and symptoms of early onset of dementia and Alzheimer’s as well as provide them with assistance in finding resources for treatment and care. It is a known fact that the sooner you are diagnosed, the better your future as well as the more prepared your family is to help provide the care, ” Salzman said.

Pictured: Florida House District 1 Rep. Michelle Salzman, left, watches as Gov. Ron DeSantis signs the Ramping up Education of Alzheimer’s Disease and Dementia for You (READY) Act during a ceremony in Fort Lauderdale. Photo for NorthEscambia.com, click to enlarge.

How to overcome a cooking rut

Who will challenge Alabama for No. 1?

Businesses are investing in themselves at a “remarkable” pace