WASHINGTON — The Moskva was the pride of Russia’s Black Sea Fleet, a symbol of the country’s dominance of the region and a powerful war machine that had been used to launch precision cruise missiles deep inside Ukraine.

Despite claims by Russia that an accidental fire broke out on the ship, U.S. officials confirmed on Friday that two Ukrainian Neptune missiles had struck the vessel, killing an unknown number of sailors and sending it and its arsenal to the bottom of the Black Sea.

The sinking of the Moskva on Thursday was a grave blow to the Russian fleet and a dramatic demonstration of the current era of warfare in which missiles fired from shore can destroy even the biggest, most powerful ships. It was also the most significant combat loss for any navy since 1982, when Argentina’s Air Force sank a British guided missile destroyer and other ships during the Falklands War. 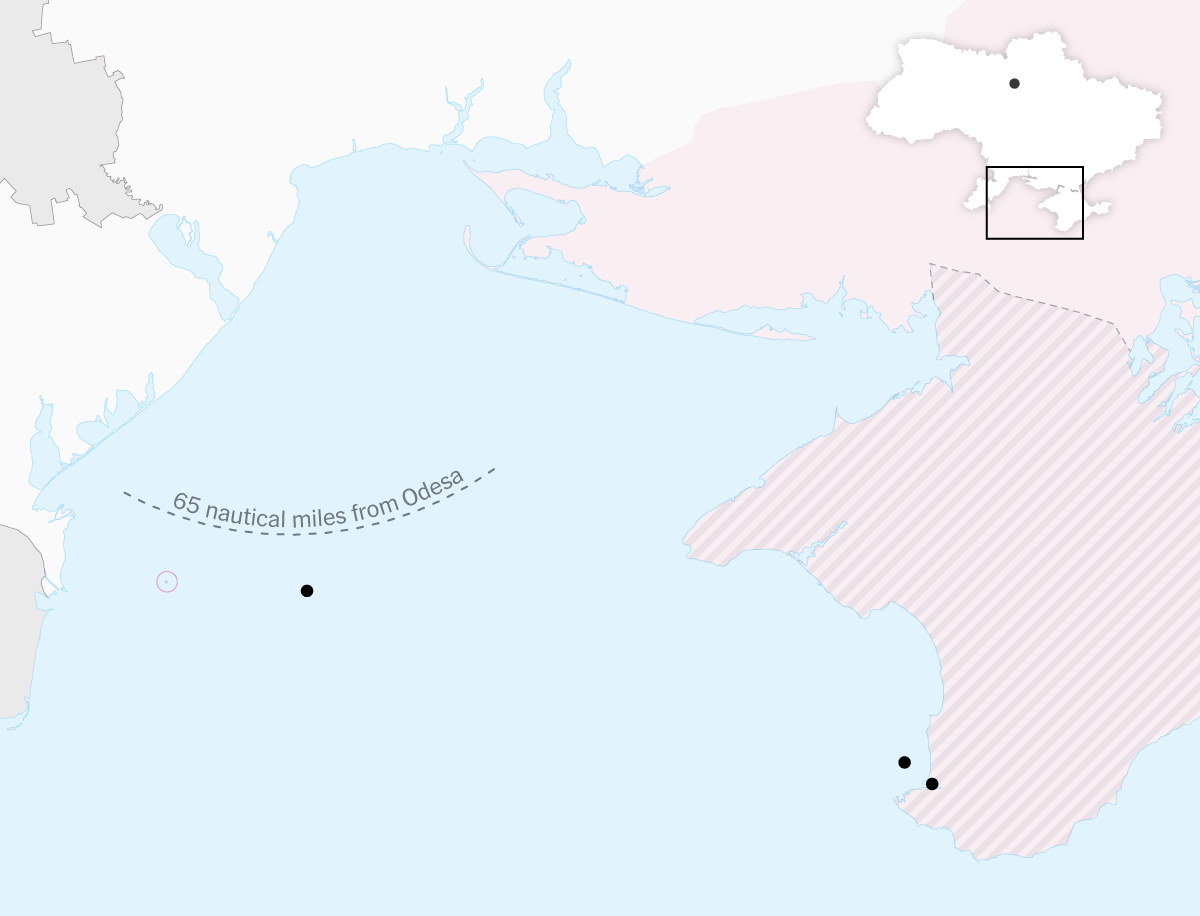 Russia’s warship, the Moskva, was hit by missiles

about 65 nautical miles south of Odesa,

according to a Defense official.

A ship with similar dimensions

and features was seen about

Russia’s warship, the Moskva, was hit

by missiles about 65 nautical miles

south of Odesa, according to a Defense official.

A ship with similar

The Russian cruise missiles have been used to brutal effect on apartment buildings in Ukrainian cities, and the Moskva’s guns had fired on Ukraine’s Snake Island. The Kremlin’s most powerful missile platform is impossible to replace, and its sinking was a bold counterattack, retired military officers said.

The Moskva inspired awe in those who saw it — bristling with missiles and looming over the landscape — and was the embodiment of Russian power in the region for decades.

“It was a very impressive ship,” said retired Rear Adm. Samuel J. Cox, the director of the Naval History and Heritage Command in Washington. “With those surface-to-surface missile launchers, she really looks dangerous. But apparently, she can’t take a punch.”

The vessel’s sinking has symbolic, diplomatic and military importance.

Russian ships have already been pushed farther off the Ukrainian coast, U.S. officials confirmed, speaking on the condition of anonymity to discuss intelligence assessments of the war. The remainder of Russia’s Black Sea Fleet is still within range to launch cruise missiles into Ukraine but is unable to support any sort of amphibious assault on the country’s coastal cities, according to former officials.

Naval analysts have worried for years that a new generation of ship-killing missiles would endanger large and important ships like the Moskva or the United States’ fleet of aircraft carriers. The sinking of the Moskva is a clear sign that the future has arrived.

The Moskva was itself designed as a ship killer. Construction of the ship, originally known as the Slava, began in 1976, and the vessel went into service in 1983. Built by the Soviet Union to sink American carriers, it was armed with missiles capable of striking planes, ships and submarines.

Upgraded many times over the years, the Moskva should have had defenses to shoot down the Ukrainian missiles. The ship was armed with a medium-range surface-to-air system that was thought to be effective within seven miles, and it also had other missiles designed to take out threats 50 miles away. In theory, its guns could have shot down a Neptune missile as well. But none of those defenses worked.

“Warfare is a brutal thing,” said retired Adm. Gary Roughead, a former chief of naval operations. “You have to make the investments to defeat the kinds of weapons that people are going to throw at you.”

Anti-ship weapons are not hard to build or field. Hezbollah struck an Israeli warship in the Lebanon war in 2006. Houthi rebels in Yemen fired multiple anti-ship missiles at a U.S. Navy destroyer in two separate attacks in 2016, which drew retaliatory Tomahawk cruise missile attacks in response. While the U.S. Navy has invested in antimissile technology for decades, American war planners have said that China’s missiles would pose a real threat in a conflict.

While symbolically painful for Russia, the loss of the Moskva also has practical effects on the ongoing war. Missiles that would have been fired at Ukraine are now at the bottom of the Black Sea, a blow to Russia’s war plans.

The Moskva would have played a primary role in any potential amphibious assault on the Ukrainian coastal city of Odesa. While other landing ships would have been used to bring Russian naval infantry to the coastline, the Moskva would have protected those ships and launched missile strikes on the city.

Now, Admiral Cox said, any amphibious assault on Ukraine will be much more dangerous for Russia, with its landing and amphibious ships much more vulnerable to attacks.

The farther Russian ships are from the coast, the more limited their support for ground assaults on Ukrainian cities will be. While the greater distance could make some attacks more difficult, it would not put Russia’s more powerful missiles out of range. Some of Russia’s sea-launched cruise missiles can reach 1,550 miles, while Ukraine’s Neptune missiles have a range of about 190 miles.

Before the strike on the Moskva, a senior Defense Department official said, the Russian Black Sea Fleet operated with relative impunity.

“They thought they could run around the Black Sea and go anywhere they wanted,” said retired Adm. James G. Foggo III, the dean of the Center for Maritime Strategy at the Navy League of the United States. “They found out otherwise.”

Preventing an attack on Odesa has been a priority of Ukraine’s military, which for weeks has been asking the United States and its allies for additional anti-ship missiles and other so-called coastal defense weaponry.

Senior Ukrainian officials have told the Pentagon that they need the anti-ship missiles and other weaponry to open a new front and turn back the Russian invasion, U.S. officials said.

The strike on the Moskva showed that Ukraine’s requests were “very prescient,” the senior Defense Department official said.

By building up coastal defenses, Admiral Foggo said, the Ukrainians will be able to engage the Russian fleet even without a powerful navy. Missiles, smart mines and other advanced devices will help them keep Russian ships away.

“You don’t necessarily need to have a battleship to go out and protect the shores of Ukraine,” he said. “It’s easier to fire from the shore. It’s easier to defend than it is to attack. So now the Russians have a problem.”

The United States responded to Ukraine’s request by adding coastal defense weapons to an $800 million package announced this week. Senior Pentagon officials also asked American military contractors in a meeting on Wednesday to develop proposals for additional anti-ship missiles that the United States could provide to Ukraine or its allies.

Some American officials said they were puzzled at why Russia had continued to claim that the Moskva was destroyed in an accident and not by a Ukrainian strike. Russia remains eager to play down Ukraine’s military successes to the Russian public. U.S. intelligence agencies have assessed that senior Russian officials have not given President Vladimir V. Putin accurate accounts of the Ukraine war, and former officials said Russian military officials most likely lied to the Kremlin about what happened to the Moskva.

“Losing the flagship of the Russian Black Sea Fleet is like losing a crown jewel: a serious prestige damage, which, I believe, has likely hit Putin personally given how much importance he has attached to rebuilding Russia as a naval great power,” said Katarzyna Zysk, a professor at the Norwegian Institute for Defense Studies in Oslo.

The sinking of the Moskva, officials said, also demonstrated the strategic importance for Ukraine of expanding the battle from the country’s towns to the Black Sea, where Russia’s fleet has long dominated. And it revealed, Admiral Foggo said, deep problems in the Russian military. Well-trained sailors should have been able to contain the flooding caused by the missile strikes, put out the fire and save the ship, he said.

While few American analysts would have predicted that the Ukrainians could have destroyed the Moskva, officials said that at this point in the war, no one should be surprised by Ukraine’s capabilities.

And the sinking of the ship is one of the most high-profile blows yet landed by the Ukrainian military.

“It is striking to think about how damaging this will be to the morale of the Russian Navy, given the symbolic name, its role as a flagship and the fact that it is a combat casualty,” said retired Adm. James G. Stavridis, a former supreme allied commander in Europe. “In terms of the Russians losing such a significant unit, yes, you have to go back to World War II.”