In October 1934, the Scranton Republican asked their readers to submit their best Halloween party recipes. The paper’s editors selected ten spooky treats as the best Halloween dishes and 14 runner-up recipes.

The readers who’s recipes were selected as the best received $1 as a prize. Adjusting for inflation, the prize today would be $19.65.

The winning recipes included some interesting flavor combinations such as ground frankfurter mixed with chopped stuffed olives served on whole wheat bread (it was called the Black Cat Sandwich) or sardine paste sandwich served with a small envelope containing a fortune (a Fortune Sandwich).

Other winning recipes included more traditional Halloween or fall ingredients such as applies, pumpkin and cider.

I prepared three of the winning recipes – Jack O’Lanterns, Round-Ups and Fluffy Pumpkin Tarts. All were tasty and easy to make.

The recipe for the Fluffy Pumpkin Tarts was submitted by Bert Reynolds of Waymart.

Mix pumpkin, milk and beaten egg yolks; mix sugar and spices and salt and add to pumpkin mixture and mix well. Fold in stiffly beaten egg whites; line fluted tart pans with pastry and fill with pumpkin mixture. Bake in a quick oven for 10 minutes; then reduce heat to moderate temperature and bake until filling is firm, about 15 minutes. Roll peanut brittle very fine and spread on top of tarts, mounding slightly.

A quick note with this recipe, when shopping for ingredients I found a pre-seasoned can of Libby’s Pumpkin Puree at Wegmans for this recipes. I had a hard time finding peanut brittle at the store, so I subsisted cowboy bark as the topping instead of peanut brittle.

The Jack O’Lanterns and the Round Ups were both submitted by Mrs. R.M. Gray of Washburn Street, Scranton.

Slice the top from an orange. The scoop out all the orange pulp. Cut the eyes, nose and mouth from the orange to represent a jack o’lantern. Raisins may be used to form the features instead of cutting them out of the oranges.

To the orange pulp, add cut up, apples, grapes, bananas, nut meat and any other fruits desired. Chill and then fill the orange cups with the fruit salad. Replace the tops on the oranges and serve. Saltines with peanut butter spread or plain are delightful with the salad.

Split cake doughnuts in half to form circles. Soften cream cheese with milk and mash it. Spread a layer of cream cheese and a layer of either orange marmalade or tart jelly between the doughnut halves, sandwich fashion. Eat these this way from the fingers or cut them in two and serve with a fork if desired.

Here are the all the recipes (winners and runner-ups) featured in the Oct. 26, 1934 edition of the Scranton Republican. 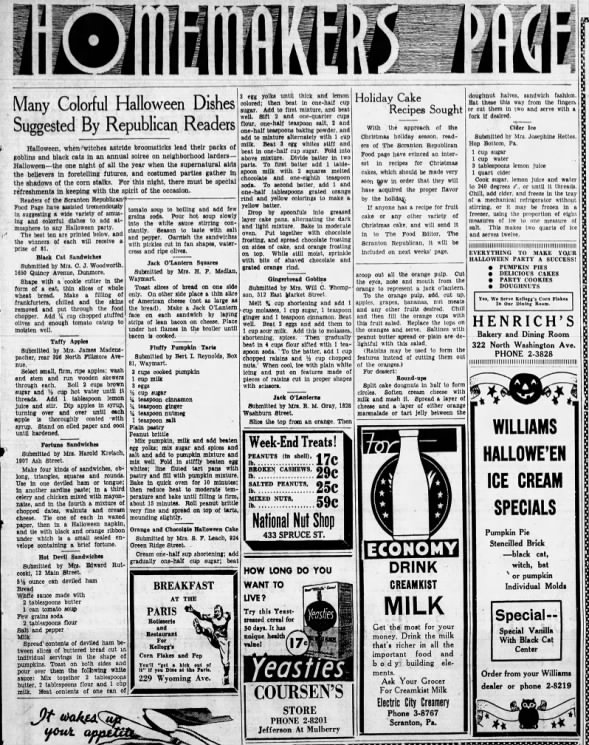 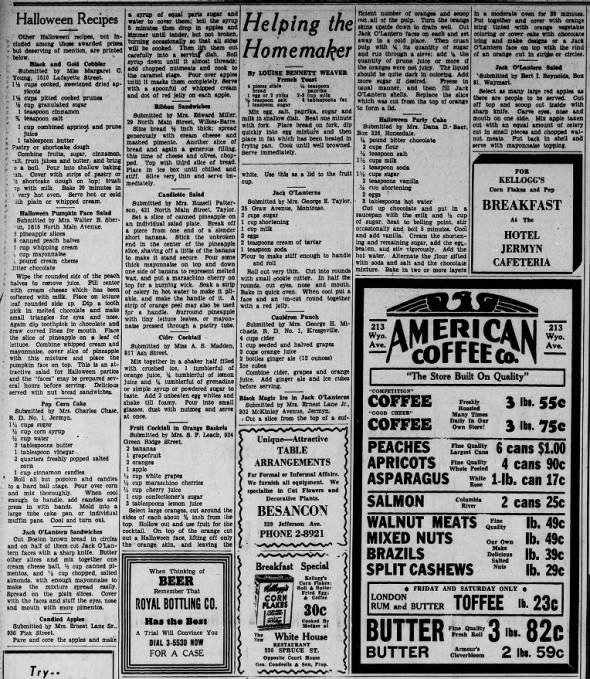 If you are a home chef or baker, consider submitting your favorite recipe to the Local Flavor, Recipes We Love feature that runs in the Life&Times section of the Sunday Times. Winners receive a $50 gift card to Riccardo’s Market in Dunmore.

You can submit your recipe by sending a letter to Local Flavor, Scranton Times-Tribune, 149 Penn Ave, Scranton, Pa 18503 or by emailing gmazur@timesshamrock.com.

Brian Fulton, library manager, oversees The Times-Tribune’s expansive digital and paper archives and is an authority on local history. Contact Brian at bfulton@timesshamrock.com or 570-348-9140.

The science behind fall foliage

Analysis: 9/11 anniversary — the attacks forged an age of political turmoil

Biden Falls Short on Pledge for U.S. to Be the World’s Vaccine ‘Arsenal,’ Experts Say