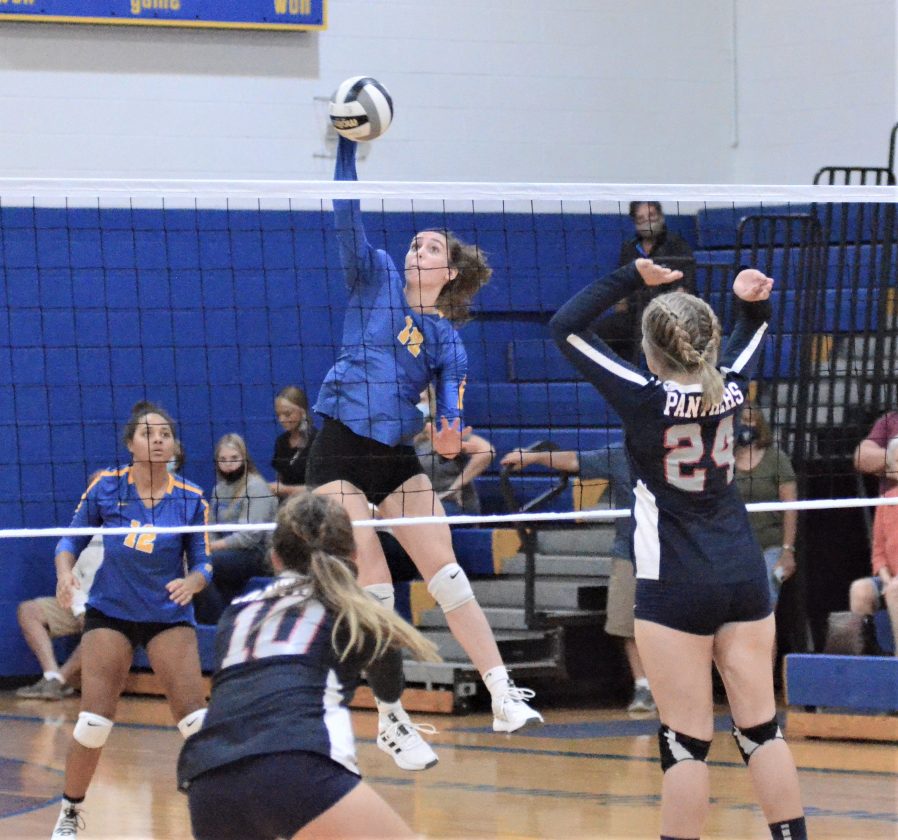 Andrew Grimm
BIG HIT — Catholic Central’s Clara Symington hits over Buckeye Local’s Isabella Hepburn and Abby Berze during Monday’s match at the Mickey Barber Gymnasium. The Crusaders got their ninth win of the season with a sweep.

The Panthers battled, but the Crusaders were able to pull away in all three games en route to sweeping their Jefferson County foe, 25-18, 25-18, 25-10, Monday night at home inside the Mickey Barber Gymnasium.

“I’m happy,” first-year Catholic Central (9-6) head coach Jenna Ogden said. “Buckeye Local is a bigger school. It was a big win for us. We have got some big games coming up. Hopefully, we can get on a run and can get some big wins heading into the OVACs and tournament time.”

After Buckeye Local tallied the first five points of the second set, the Crusaders outscored the Panthers, 50-23, the rest of the way.

“I think this was the best game we have played all year. I thought we were competitive.”

“They have a big middle hitter No. 10 (Clara Symington),” DiBias said. “We had to work against her. We tried to block her. Their libero is a good server. We competed. The score doesn’t tell the whole story.”

“I feel like Buckeye Local is always tall,” Ogden said. “I told the girls at practice that Buckeye Local is tall and that we are going to have to block well. They got their hands on some of our hard-hit balls. Good for them. That is a tough skill to have.”

The Crusaders raced out to an 11-3 lead in the first set forcing the Panthers to call timeout. Buckeye Local battled back and pulled to within 15-9 forcing Catholic Central to call a timeout. The home team regrouped and pulled away for a 25-18 victory to take a 1-0 lead in the match.

Buckeye Local jumped out to a 5-0 lead in the second set, but the visitors were unable to hold onto the lead. Catholic Central took the lead, and the Crusaders once again won the game by seven points to take a 2-0 lead.

“I told the girls, and I tell them all the time, that serving wins games,” Ogden said. “I think it is real important. I think we may have only missed one serve today. We were able to score a lot of points.”

The hosts built an 11-3 advantage in the third set forcing Buckeye Local to call a timeout. The Panthers called another timeout with the score 16-7, but they were unable to turn the tide as the Crusaders pulled away to win the game by 15 enroute to sweeping the match.

“A win is a win,” Ogden said. “It’s a win. Buckeye Local has a decent team. You have to play well to beat a decent team. We still made some mistakes that we are going to have to iron out as we get ready for tournament play.”

Catholic Central is scheduled to play St. John Academy tonight on the road. The JV match will start at 6 p.m.

Buckeye Local is slated to play Wednesday at Martins Ferry. The JV match is scheduled to start at 6 p.m.


Today’s breaking news and more in your inbox

Oz-McCormick race in Pa. still unresolved as other tests of Trump’s influence loom

The Politics Of Privacy And Antitrust; Will Apple (Finally) Enforce Fingerprinting Rules?

‘It’s getting out of hand’ – Baltimore Sun