Sign up to myFT Daily Digest to be the first to know about Chinese politics & policy news.

China’s anti-corruption watchdog has hit out at the country’s entertainment industry as Beijing tightens its grip on online celebrity culture and widens the scope of a crackdown on wealth and big business.

A statement posted to the website of China’s Central Commission for Discipline Inspection this weekend cited a wave of “negative news” and singled out several celebrities, including former Prada ambassador Zheng Shuang, who is accused of tax evasion, and Canadian-Chinese star Kris Wu, who was arrested last week on suspicion of rape.

The watchdog’s comments came after China’s internet regulator on Friday set out a list of 10 measures to address issues in the sector, adding that it would “resolve the problem of chaos” in online fan culture that it said was having a negative impact on young people. The measures include banning online popularity rankings of celebrities and regulating companies that work with them.

Separately, the name of Zhao Wei, a billionaire actress with ties to the country’s tech industry, has been scrubbed from Chinese online platforms in recent days and shows referring to her have been removed. 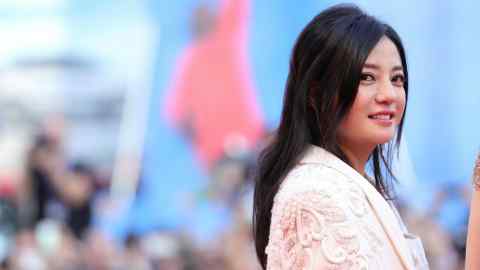 The entertainment crackdown follows the launch of Chinese president Xi Jinping’s push for “common prosperity”, which aims to more widely distribute wealth and follows a series of dramatic regulatory interventions that have strengthened the party’s control over the private sector.

A shift in the Communist party’s approach to private business has already included a move to reduce after-work drinking following rising outrage over sexual assault, which was thrust into the spotlight after a scandal at tech firm Alibaba this month.

Shows that included Zhao Wei, who worked as an ambassador for Italian brand Fendi last year, were removed from platforms such as Tencent Video last week. Zhao and her husband were previously embroiled in an investment scandal that led to them being banned from China’s securities market in 2017.

Zhao’s wealth has in part come from stakes in the tech industry, which has come under intense government scrutiny since the last-minute cancellation of the initial public offering of fintech Ant Group in November last year after its founder Jack Ma publicly criticised the Chinese financial system. Zhao bought stakes in Alibaba Pictures in 2014, a film company that forms part of Jack Ma’s tech empire.

Zheng Shuang, who is well known for her roles in Chinese television, will need to pay a $46m fine for tax evasion, according to state media reports this weekend that linked the penalty to the common prosperity goal. Zheng had already come under intense scrutiny earlier this year for having two children in the US through surrogacy, which is illegal in China, and was dropped by Prada over the ensuing row.

Xi’s push for common prosperity has sparked fears across the global luxury sector, where share prices of leading firms such as LVMH and Burberry have slumped in recent days. On Thursday, Han Wenxiu, an economic official, said common prosperity did not mean China would “rob the rich to help the poor”.

Separately on Friday, the Cyberspace Administration of China also launched a two-month campaign targeting harmful information about finance and the economy, such as rumours and false interpretation of data.

LOOK: Daniil Medvedev’s coach storms out after world No. 1 yells at him during Halle final