Tencent Music Entertainment‘s (NYSE:TME) stock price recently tumbled to a fresh 52-week low after China’s State Administration for Market Regulation (SAMR) ordered the streaming music giant to give up its exclusive licensing rights for online music. The move wasn’t surprising, since the SAMR has been scrutinizing TME’s exclusive licensing deals over the past four years.

TME previously appeased the SAMR by sublicensing most of its music to other platforms, but its competitors accused it of charging inflated fees to drive them out of the market. TME then agreed to lower its sublicensing fees, but the SAMR’s ruling indicates those changes weren’t adequate. 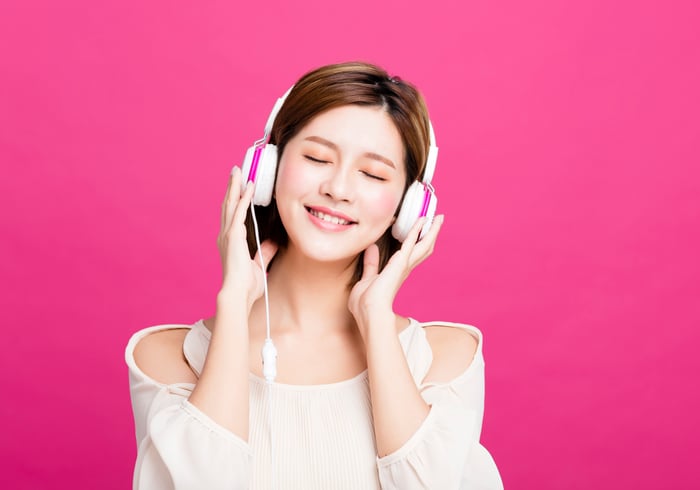 The SAMR will also impose a nominal fine of 500,000 yuan ($77,213) on TME for improperly reporting its previous acquisitions of Kuwo and Kugou. Merging those two platforms with QQ Music five years ago enabled TME to take over more than 80% of China’s streaming music market. That penalty was lighter than expected, since earlier rumors suggested TME could be forced to divest both platforms.

The Chinese government’s actions against TME weren’t as harsh as its recent moves against Alibaba, DiDi Global, and its private education companies. But does getting a lighter slap on the wrist make TME a worthy investment?

TME is cheap for obvious reasons

TME stock currently trades about 20% below its IPO price of $13, and it initially looks cheap at 19 times forward earnings and three times this year’s sales.

Spotify (NYSE:SPOT), which owns a major stake in TME, isn’t profitable and trades at four times this year’s sales. Yet Spotify’s stock price has risen nearly 50% since going public via a direct listing in 2018.

Yet TME’s stock is cheap for several reasons. First and foremost, its mobile monthly active user (MAU) growth across its online music and social entertainment platforms stalled out over the past year.

The withering of TME’s online music segment — which houses QQ Music, Kugou, Kuwo, and its digital downloads — suggests that smaller rivals like NetEase (NASDAQ:NTES) Cloud Music are gaining ground. And the decline of its social entertainment segment, which houses its WeSing karaoke and live streaming platform, is even more troubling, since each paying social entertainment user-generated 16 times more revenue than each paying online music user last quarter. This platform could be losing users to popular short video streaming apps like ByteDance‘s Douyin (known as TikTok outside of China).

It’s not growing in the right places

When TME went public, the bulls claimed WeSing differentiated it from other streaming music companies like Spotify, and that its social entertainment ecosystem would enable it to generate consistent profits.

Yet TME’s slowing MAU growth forced it to rely more heavily on monetizing its existing users over the past year. The social entertainment business has also been consistently bleeding paid users.

Meanwhile, TME’s growth in average revenue per paying user (ARPPU) from its online music business continues to decelerate. Its social entertainment business grew its ARPPU again over the past three quarters, but that growth was largely offset by its declines in MAUs and paid users.

Decelerating growth with storm clouds ahead

That slowdown was caused by its decelerating growth in MAUs, paid users, and ARPPU. The SAMR’s previous probe — which forced it to reduce its high-margin sublicensing fees — also squeezed its margins.

Prior to the SAMR’s decision, analysts had expected TME’s revenue to rise 17% in 2021, but for its earnings to decline 9% as it ramped up its investments in original content and generated lower sublicensing fees. Those estimates will likely be reduced to reflect its complete loss of sublicensing revenue and its exclusive content from the world’s top record labels. That shift could also give NetEase Cloud Music, its closest direct competitor, and other competitors a chance to catch up.

TME will likely remain China’s top streaming music company, but it’s not a compelling investment. It was already losing its momentum, and the SAMR’s latest actions will suck the remaining wind out of its sails. China’s unpredictable regulatory moves could exacerbate that pain and keep the bulls at bay.

This article represents the opinion of the writer, who may disagree with the “official” recommendation position of a Motley Fool premium advisory service. We’re motley! Questioning an investing thesis — even one of our own — helps us all think critically about investing and make decisions that help us become smarter, happier, and richer.

Rice: How we grow, cook, and eat it | Good Food

Kamala Harris is the highest-ranking mom ever in U.S. politics. Here’s why that matters

The science brief – The Science Show

Amazon workers are rising up around the world to say: enough | Valter Sanches, Christy Hoffman and Casper Gelderblom