Japan pitches ‘Society 5.0’ to keep its edge in tech and science

TOKYO — Japan is showcasing its latest scientific achievements, ranging from sea and air to space, as the government aims to boost and propagate cutting-edge technologies despite the country’s decline in international competitiveness in such fields.

The Cabinet Office is co-hosting an event dedicated to “Society 5.0,” a future society the government believes Japan should aspire to. At the capital’s iconic 634-meter Tokyo Skytree, the world’s tallest tower, over 200 items are being exhibited as examples of Japan-born innovation — mostly publicly funded — and what the world could look like in 2030, after the government initiated this fiscal year a new five-year basic plan for science, technology and innovation.

The main exhibitions began July 15 and will run through July 28, with the overall event continuing until Sept. 5. Organizers had hoped to attract international visitors, but with the Tokyo Olympics closed to overseas spectators, “we want them to enjoy virtual exhibitions,” a Cabinet Office official said.

The Japan Aerospace Exploration Agency is exhibiting the reentry capsule of the asteroid probe Hayabusa2. Launched in December 2014, it returned and dropped a capsule to Earth containing two samples from the 4.6-billion-year-old Ryugu asteroid in December 2020. JAXA is now conducting research into the origin of life on Earth and the evolution of the solar system.

A full-scale model of the deep-sea research vehicle Shinkai 6500, developed by the Japan Agency for Marine-Earth Science and Technology, is also being displayed at the venue. A manned submersible that can dive 6,500 meters, deeper than any other vehicle of its kind, Shinkai 6500 has been deployed since 1991 to study seafloor topography and geology in the Pacific, Atlantic and Indian oceans as well as the seas around Japan. A full-scale model of the Shinkai 6500 deep-sea research vehicle at the Society 5.0 expo in Tokyo. (Photo by Yuki Kohara)

Defined by the Cabinet Office as “a human-centered society [helped] by a system that highly integrates cyberspace and physical space,” Society 5.0 is a concept intended to broaden the discussion of innovation from science and technology to all of socioeconomic activity.

The government has also established multiple large-scale programs to encourage companies, involved in everything from health care and mobility to energy, to invest in research and development, not only at the level of pure technology but also to bring it to a pilot level.

The exhibition includes some achievements from these programs, including Cyberdyne’s HAL, standing for “hybrid assistive limb,” which the company claims to be the world’s first “wearable cyborg.” A HAL exoskeleton autonomously walks on a treadmill at the venue. 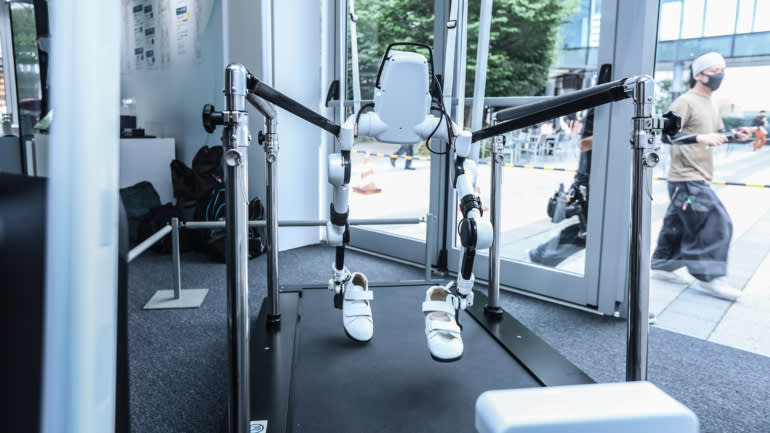 A Cyberdyne HAL exoskeleton walking at the exhibition. (Photo by Yuki Kohara)

When worn on a leg, HAL can read faint signals sent to muscles from the brain thanks to electrodes attached to the wearer’s skin, determining the wearer’s desired movements. “Even if your nerves are not connected at first, they gradually recover through the wearing of HAL, and you can eventually move your own body parts without wearing it,” said a person from Cyberdyne.

SkyDrive’s “flying car” also attracts the attention of visitors, who can observe a full-scale model of the SD-03, which performed the first successful public manned flights of a flying car in Japan in August 2020. Co-founded by former Toyota Motor engineer Tomohiro Fukuzawa, the startup plans to offer commercial mobility service during Expo 2025, to be held in Osaka. 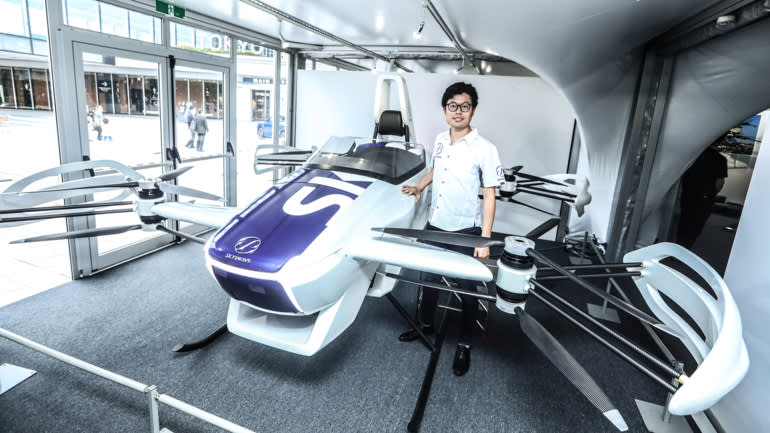 SkyDrive CEO Tomohiro Fukuzawa with a model of a “flying car” on July 14, a day before the expo’s official launch. (Photo by Yuki Kohara)

“It is as if we are traveling to the future,” said Shinji Inoue, a minister of state who heads science and technology policy, when he visited the exhibition last week. Asked by reporters how to make these cutting-edge tools an everyday reality, Inoue spoke of a need to deregulate the market when it comes to obtaining operating permits for such items.

Indeed, the government acknowledges challenges in keeping up with the country’s capabilities in implementing scientific progress. Digitalization initiatives, the premise for achieving Society 5.0, “could not sufficiently create new business models through data collaboration, like what we see in other countries,” said a report from the Cabinet Office analyzing the previous five-year plan through fiscal 2020. Instead, the initiatives aimed at improving the efficiency of existing operations, failing to drive innovation. In terms of research capabilities, “the international status of both the quantity and quality of papers continues to decline,” said the report, although Japan has seen many Nobel Prize winners. Japan’s share of international science publishing has been declining in the past years; Japan now ranks ninth in the world in the number of frequently cited “high-quality” papers — so-called top 1% most highly cited papers — whereas in the 1990s it ranked fourth.

A total budget of over 26 trillion yen ($235 billion) was allocated to science under the previous five-year plan. The government has increased the amount to 30 trillion yen for the latest plan, as it seeks to catch up with the U.S., as well as China and other Asian rivals.

Dear Abby: Lonely, loitering senior disrupts business; ‘How do we get rid of him?’

Thousands of Cubans protest against conditions on island

Marjorie Taylor Greene may be politically safe, but her conservative Georgia constituents have concerns about her tactics

Miami-Dade building collapse: Some families frustrated by pace of search and rescue efforts