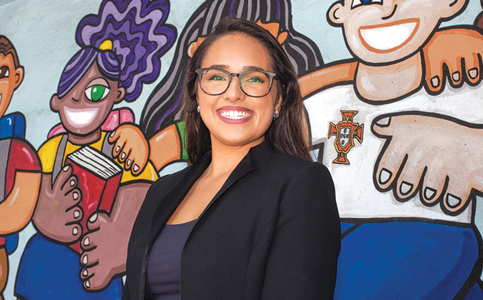 Luisa Santos was in junior high school when she learned she was an undocumented immigrant. That, she said, was a catalyst that politicized her at a young age and inspired her to become an advocate and learn about organizing, a skill she has since put to use many times, including last year, when she became Miami-Dade’s youngest school board member.

She had an early love for education and minored in the subject while at Georgetown University. As part of her schooling there, she worked as an assistant fourth grade teacher at one of the highest-performing schools in the district.

That experience was markedly different from her work later at another school that was among the worst-performing in Washington, DC.

“Every day, I was exposed to a stark contrast of what education should be for our students, which led to an internship at the Department of Education, my first exposure to policymaking,” she said. “It was interesting to learn about national policy in education and trying to marry that with my experience as a student and the students I worked with throughout those years.”

Then she caught the entrepreneurial bug. She learned about using liquid nitrogen to freeze ice cream and was enamored with the idea. So, she opened her own business, Lulu’s Ice Cream, which today operates in downtown Miami.

“I thought it would be an interesting thing I could do, employ students and support their needs,” she said. “I grew it for seven years and have worked, I’m proud to say, with many students throughout the years.”

The thing is, she missed working in education, particularly on big-picture issues, so she joined the board of PS 305, a local education advocacy organization. As part of her work with the group, she attended and wrote summaries of county school board meetings.

“Siting in that room, I thought, ‘Wow. There is a big disconnect between what the students I work with at Lulu’s Ice Cream are going through, what teachers are going through and what’s being discussed here,’” she said. “The other missing piece was this kind of 21st Century thinking of what students need in an ever-evolving world.”

When longtime board member Larry Feldman announced plans to leave, she decided to run for his seat representing District 9, which includes more than 50 schools between Homestead and Pinecrest.

“I thought I could contribute something and be a catalyst for change in the right direction, to provide the opportunity I’ve had in my life to every student in Miami,” she said. “And here we are.”

To read the full article and the rest of the Miami Today issue, subscribe to e-MIAMI TODAY, an exact replica of the printed edition.

‘There is real teeth to this’: Legal experts weigh in on Smartmatic’s $2.7 billion lawsuit against Fox News

E.U. proposal would allow vaccinated American tourists by the end of June

Is Marvell Technology (NASDAQ:MRVL) Using Too Much Debt?

Symptoms, spread and what to look out for