My colleague Pete DeMola has a story about a criminal operation that, starting locally two years ago, targets used fryer oil sold by restaurants to a Buffalo-based company that recycles it into renewable biofuels: 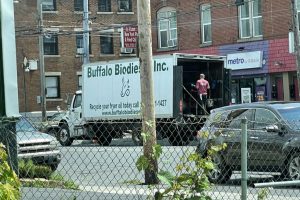 Thieves have executed at least 700 heists in every county in the Capital Region, siphoning oil from the grease-caked black storage vats inconspicuously located behind restaurants and ferrying away the sludge-like substance under the cloak of darkness.

The string constitutes just some of the 60 known thefts in Schenectady County within the past two years, according to logs provided by Buffalo Biodiesel. Albany County has incurred nearly 300 thefts during the same time period, including dozens along Central Avenue and Wolf Road — even the Times Union Center, which the company flagged as one of its most hardest-hit locations.

Conflux Technology and GKN Additive to collaborate on heat exchanger development, design and production in Europe

Biden says having children wear masks is not about politics