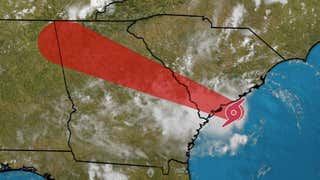 Tropical Storm Danny – the fourth named storm of the 2021 Atlantic hurricane season – formed off the Southeast coast Monday, then made landfall hours later in South Carolina, and will spread rain into the Tennessee Valley Tuesday.

This system was first dubbed Tropical Depression Four late Monday morning as it was just over 100 miles off the South Carolina coast. A Hurricane Hunter aircraft mission Monday afternoon confirmed it contained winds strong enough to be considered a tropical storm.

Danny then made landfall just before 8 p.m. EDT Monday on Pritchards Island, South Carolina, north of Hilton Head, as a 40-mph tropical storm, according to the National Hurricane Center.

Danny is forecast to weaken quickly and dissipate over north Georgia or northeast Alabama sometime Tuesday.

This system won’t bring major impacts to the Southeast, but some locally heavy rainfall is expected.

The immediate coasts of Georgia and southern South Carolina could see a few inches of rain into Tuesday, according to the National Hurricane Center.

It might also spread rain toward parts of northern Georgia, upstate South Carolina and northern Alabama by Tuesday.

Localized flash flooding is a possibility in all of the areas mentioned above.

Rip currents will also be a threat on the Southeast coast and beachgoers are urged to stay out of the water. Ten rescues were performed at Carolina Beach and Wrightsville Beach, North Carolina, Monday.

This makes 2021 only the fourth hurricane season in which the fourth named storm formed before July, according to Phil Klotzbach, tropical scientist at Colorado State University.

In late May 2020, Tropical Storm Bertha also formed just hours before moving ashore in South Carolina, one of 11 storms to landfall in the U.S. in that record-breaking season.

The Weather Company’s primary journalistic mission is to report on breaking weather news, the environment and the importance of science to our lives. This story does not necessarily represent the position of our parent company, IBM.

U.S. speedskater Erin Jackson, the world No. 1 in the 500m, fails to qualify for the 2022 Beijing Olympics