A new treatment for advanced squamous cell carcinoma head and neck cancer has shown promising results in a recent clinical trial led by researchers at the University of Arizona Health Sciences.

The results included a 19% positive overall response rate for patients – and a 38% positive response rate for HPV-negative patients – all of whom were resistant to available standard treatments. Among the 16 HPV-negative patients, two responded with a disappearance of all signs of cancer, and four more responded with a decrease in the size of a tumor. 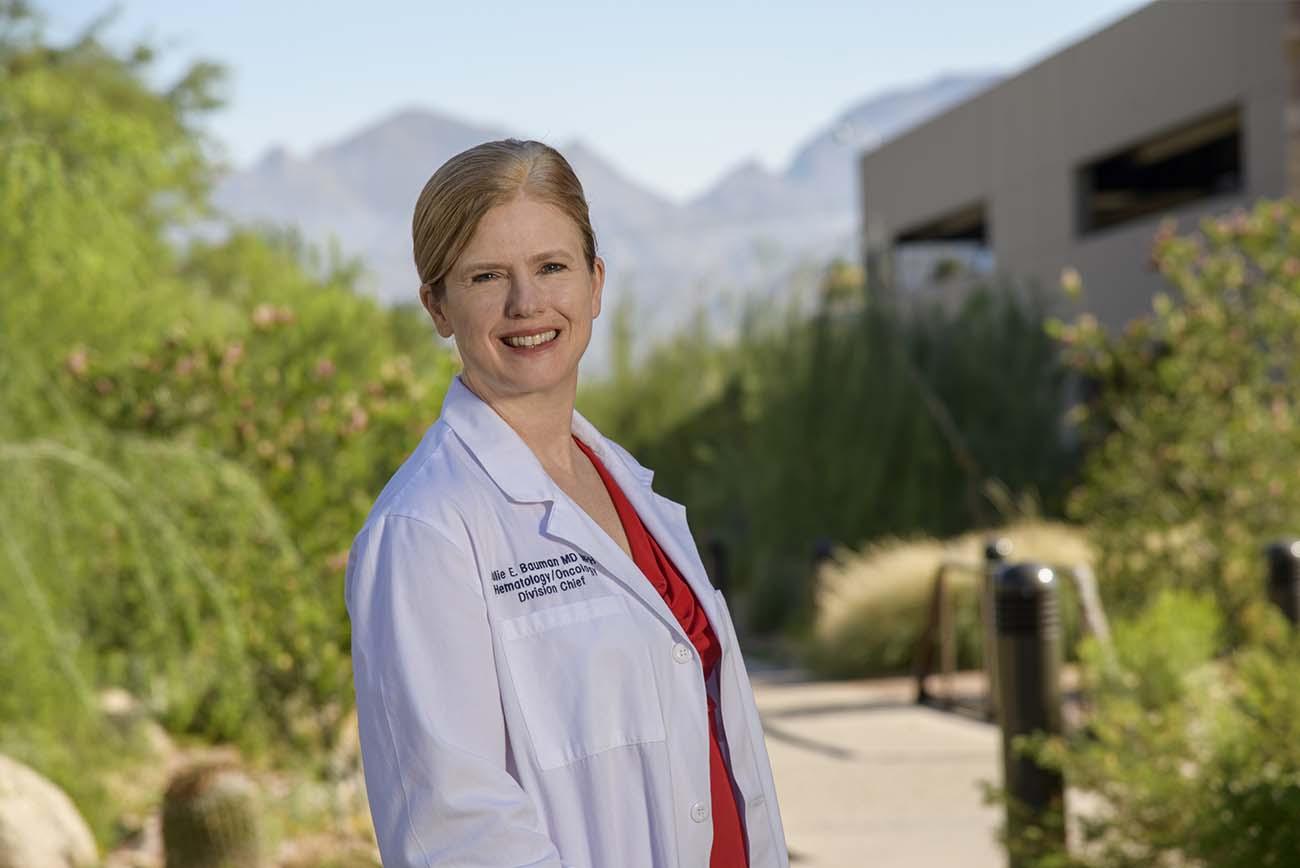 “The response rate is striking,” said Dr. Bauman, who is also a professor at the UArizona College of Medicine – Tucson. “In this patient population with refractory, incurable disease, at most we might expect a 5% response rate to any standard or experimental treatment. Usually, our primary, realistic goal is to stabilize the cancer for three to six months.”

The clinical trial was designed to test the effectiveness of a new monoclonal antibody drug, ficlatuzumab, alone and in combination with cetuximab, a different monoclonal antibody already approved by the U.S Food and Drug Administration for use in head and neck cancer. Monoclonal antibodies are proteins made in a laboratory that act like natural antibodies in the human immune system. They can be used as a targeted treatment against some types of cancer.

Monoclonal antibodies, such as the ones in this trial, can work in two ways. First, they can act as a drug that directly inhibits a growth pathway that the cancer cell depends upon, such as the epidermal growth factor receptor (EGFR) targeted by cetuximab or the hepatocyte growth factor/mesenchymal epithelial transition factor (HGF/c-MET) pathway targeted by ficlatuzumab.

These targets are abnormally activated in HPV-negative head and neck cancer. Monoclonal antibodies can also help the body’s natural immune system to better recognize and kill the cancer, by recruiting or activating natural killer cells and effector T cells.

The monoclonal antibody cetuximab blocks the EGFR signaling pathway in some patients, but it isn’t always effective. All of the patients in this study had previously received cetuximab yet the cancer had progressed. For this reason, Dr. Bauman explored the use of ficlatuzumab to target HGF/c-MET, a different pathway that cancer cells can use to escape cetuximab.

Understanding why the combination of ficlatuzumab and cetuximab was most effective requires further investigation. Dr. Bauman hypothesizes there may be a dual mechanism where the drugs have an anti-tumor effect and work to activate the immune system to fight the disease.

Head and neck cancers account for nearly 4% of all cancers in the United States but can be among the most devasting for patients. Swallowing, chewing and speaking are often affected by the cancer and treatments such as radiation and chemotherapy.

There are two primary causes of head and neck cancer, one of which is a strain of the human papillomavirus (HPV). The other comes from alcohol or tobacco use and other environmental carcinogens, with the resulting cancer referred to as HPV-negative head and neck cancer. Patients in the latter group have the poorest outcomes from the disease.

A larger Phase III clinical trial could be initiated in 18 months. Such a trial would include a larger number of patients in the U.S. and in Europe. If then proven safe and effective, the combination therapy could eventually be approved for use to treat more patients.

“To have a positive clinical trial in a population of patients with no additional treatment options is not a common experience,” Dr. Bauman said. “As a clinical researcher, it would be amazing to see a drug go to market that could help patients live better and live longer.”

Key Things To Consider Before Buying Lite-On Technology Corporation (TPE:2301) For Its Dividend

Politics and the vaccination process

Taliban to bring back executions and amputations as punishment, official says – The Washington Post

On Technology and Equal Justice

‘Recruitment and education’: Research for Me connects volunteers to clinical trials