That’s one of several findings released as part of a new research brief from the Kentucky Council on Postsecondary Education. The analysis shows that, on a median basis, Black, Asian and Hispanic workers in Kentucky continue to earn less than white counterparts do over a lifetime. In many cases, the gaps are severe.

For instance, Black Kentuckians with an associate degree earn only about 46% of the amount that white workers make over a lifetime with the same credential. That number grows to 55% at the bachelor’s degree level and 57% at the master’s degree level. However, even with a master’s degree, Black workers still earn less on a median basis than white employees who only have a high school diploma.

“In some cases, people of color would need to work two lifetimes to match the income of a white peer,” said CPE President Aaron Thompson. “These inequities betray our values as a state and diminish the hard work of too many Kentuckians. If we want to encourage college-going and build a workforce for the future, we need to make sure all workers receive the financial rewards that befit their education.” 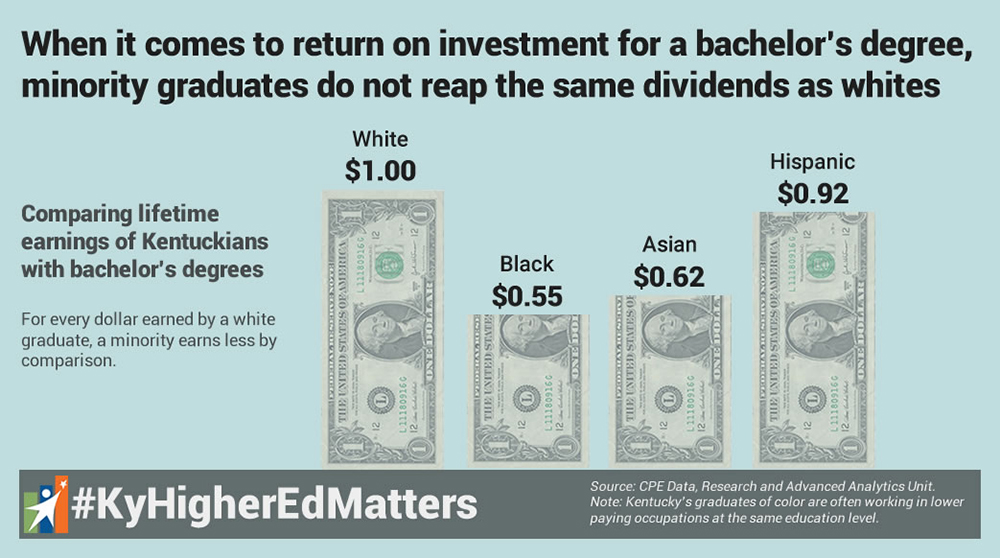 Overall, the report found that college degrees provide financial benefits for all racial and ethnic groups and often help narrow the income disparities with white workers.

The comparisons did not control for occupational differences and measured gaps regardless of job type, seniority, location and years of experience. Researchers said much of the disparities might result from minority graduates — at all education levels — working in lower-paying occupations. Still, white Kentuckians collect the highest wages at nearly every level of attainment.

Like Black Kentuckians, the income disparities for Asian workers remain profound. Asian workers with an associate degree make about 54% of the money that white workers earn with a similar credential. With a bachelor’s degree, Asian employees bring in about 62% of a white worker’s earnings over a lifetime. That amount increases to 72% at the master’s level.

Hispanic workers fare better than other groups but still face substantial gaps. Hispanic employees with an associate degree make about 85% of the amount that white peers earn over a lifetime. With a bachelor’s degree, the number rises to 92%, and at the master’s level, Hispanic workers completely close the income gap with white counterparts. However, the disparity remerges with terminal degrees, which include doctoral and professional degrees like law and engineering.

The report also shows that the number of terminal degrees remains low among Black and Hispanic Kentuckians. Researchers noted that both groups face inequities related to earning terminal degrees that can delay entry into the workforce and decrease lifetime earnings as a result.

Jie “Grace” Dai, CPE’s senior associate for data and advanced analytics and a lead author of the brief, said the research should encourage all colleges and universities to continue prioritizing enrollment and graduation of minority students in high-demand, high-wage fields.

“Our campuses and employers can also help narrow the gaps by providing more leadership training opportunities and more professional career paths for minority students,” Dai said. “Additionally, we’d urge all of our campuses to offer more support and resources for Black and Hispanic Kentuckians who are interested in a terminal degree.”

Today’s analysis relies on data from the 2016-18 American Community Survey to approximate lifetime earnings for full-time workers. It is the last in a three-part series of research briefs on educational attainment and lifetime earnings in Kentucky.

The first showed that higher levels of educational attainment allow workers to acquire significantly greater financial rewards over the course of a career. The second revealed that, even with advanced college degrees, women in Kentucky continue to earn significantly less than men do over a lifetime.

The brief is available on the Council’s website at cpe.ky.gov.

European soccer’s ‘Super League’ has thrown the sport into chaos. What is it all about?

US coronavirus: Cases of Delta variant are ‘rapidly increasing’ in US, expert says