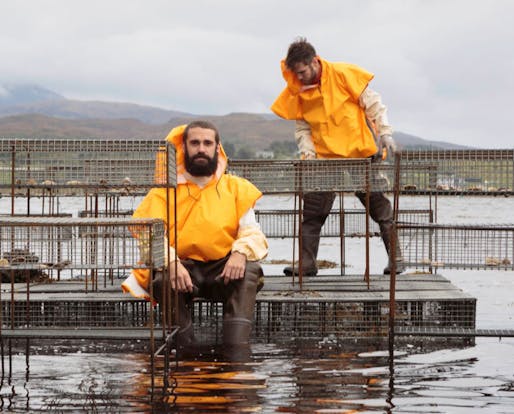 This year’s Shortlist for the 2021 edition of the Turner Prize has been announced, featuring a diverse array of artists from around the UK that includes former Wheelwright winner Daniel Fernández Pascual.

Pascual, who together with Alon Schwabe forms the collective Cooking Sections, was cited by the prize’s jury for the pair’s investigations into food systems that incorporate a wide range of mediums, evidenced by a recent sculptural exhibition at the Tate as well as the studio’s ongoing CLIMAVORE project, which turns an underwater dining table into a low-tide community eating area for residents of Scotland’s Isle of Skye.

Cooking Selections has been in the vanguard of a multidisciplinary practice engaged in what the Tate calls “social change through art” that has shaped this year’s competition comprised entirely of artists collectives for the first time in Turner history.

Other nominees for this year’s prize include a Neurodiverse English collective named Project Art Works that was praised by the jury for its continued work during the pandemic, including an exhibition at Hastings Contemporary viewable through windows of the renamed institution’s seaside gallery; a Northern Irish group whose efforts helped lead a fight for reproduction rights and against anti-gay legislation pushes in the constituency; Gentle/Radical, a Welsh collective that created physical and virtual spaces for community-centered cultural conversation during COVID, and B.O.S.S., a London-based group made up of QTIBIPOC members already making waves for a lengthy Instagram statement taking the Tate to task for some of the museum’s recent public controversies.

The Tate has yet to respond to B.O.S.S.’s comments.

“One of the great joys of the Turner is the way it captures and reflects the mood of the moment in contemporary British art,” director Alex Farquharson said in a statement. “After a year of lockdowns when very few artists have been able to exhibit publicly, the jury has selected five outstanding collectives whose work has not only continued through the pandemic but become even more relevant as a result.”

The prize winner will be announced on live television on December 1st and is included in a group exhibition with other finalists that runs from late September to mid-January at the Herbert Art Gallery & Museum in Coventry.

“We are living in an environmental crisis, and the current COVID-19 pandemic is just a manifestation of it,” Pasqual told Archinect in an interview last year. “In that case, the cause is not just a virus but something much larger: How we are destroying the planet through urbanization, deforestation or encroachment of the natural environment. That requires complex methods to understand complex causes, and it is perhaps by bringing together different disciplines that we can find some answers, or even better, ask further questions.”

Similar articles on Archinect that may interest you…

Black man killed by deputies shot in back of head

Board of Education moves toward changing graduation requirements