This story will be updated regularly.

The sun came out Monday, but it didn’t do much to warm the millions of Texans who were struggling without power.

The temperature at DFW International Airport reached a high of 14 degrees shortly after 4 p.m. — one degree lower than the previous record low for the day, and not nearly enough to clear the 4 or so inches of snow that fell Sunday.

And before people have had a good chance to steady themselves, more snow could be on its way to add to the slick conditions that have made even short trips from home treacherous, according to the National Weather Service.

Low temperatures Tuesday are expected to drop into the single digits again, and gusty winds will make it feel more like minus 15 degrees, according to Jason Dunn, a Weather Service meteorologist.

Dallas-Fort Worth was under a wind-chill warning through noon Tuesday — the first warning of its kind in North Texas.

“The cold wind chills could cause frostbite on exposed skin in as little as 30 minutes,” the Weather Service said. “Avoid outside activities if possible.”

The next round of wintry weather is expected to move into Texas by Tuesday afternoon, crossing the Red River before driving south toward Dallas, Dunn said.

Areas north of Interstate 20 could get 3 to 5 more inches of snow.

“This should be mainly a freezing rain and/or sleet mix, which could result in additional significant icing especially south of the metroplex,” Dunn said.

After a winter storm warning expired Monday morning, the National Weather Service issued another one for all of Dallas-Fort Worth. The warning, scheduled for 6 p.m. Tuesday to 6 a.m. Thursday, urged North Texans to avoid travel late Tuesday into Wednesday and warned more power outages were likely.

Gov. Greg Abbott deployed the National Guard across the state Monday to perform welfare checks and help take those in need to warming centers.

Temperatures plunged into the single digits as far south as San Antonio, and officials in Harris County warned that the freeze could create problems on the scale of the hurricanes that slam the Gulf Coast every summer.

“We’re living through a really historic event,” said Jason Furtado, a professor of meteorology at the University of Oklahoma.

The winter storm was part of a massive system that brought snow, sleet and freezing rain to the southern Plains and was spreading across the Ohio Valley and to the Northeast.

Cities across the Midwest set record low temperatures. In Minnesota, the Hibbing/Chisholm weather station, about 175 miles north of Minneapolis, reached minus 38 degrees, while Sioux Falls, S.D., dropped to minus 26. Temperatures also broke records across Nebraska.

In Kentucky, Gov. Andy Beshear warned residents to stay off the road as up to 9 inches of snow was forecast for parts of the state. “It is slick and it is dangerous,” he said. 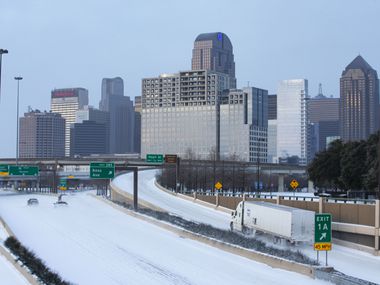 Most flights out of DFW International Airport and Dallas Love Field were stopped for a second day Monday. In Houston, runways at Bush Intercontinental Airport were scheduled to remain closed until Tuesday.

Fort Worth-based American Airlines canceled about 371 flights at DFW Airport, which is its primary hub responsible for funneling most of its traffic through the central United States. The cancellations nearly matched the 386 flights the airline halted Sunday.

At Dallas Love Field, Dallas-based Southwest Airlines canceled all flights until 1 p.m. to give time for runways and nearby roads to clear, spokeswoman Brandy King said. The airline was running a “thinned” schedule for the rest of the day.

It wasn’t much better nationwide, where airlines had canceled about 3,200 flights on Monday, according to Flightaware.com.

Dallas-area water utilities were already receiving dozens of calls about frozen pipes early Monday, and the number rose as temperatures stayed below freezing. Residents were encouraged to keep faucets running to lower the risk of freezing.

In Grand Prairie, crews were having trouble fixing two water main breaks because of the extreme cold. However, neither break was causing major problems.

The power outages and dangerous road conditions forced many businesses to close Monday.

NorthPark Center and Golden Triangle Mall in Denton were closed all day, and the Galleria in Dallas shut down at noon. Many grocery stores, such as Kroger and Central Market, also planned to close early.

H-E-B, the state’s largest chain of grocery stores, closed locations around Austin and San Antonio, cities that have few resources to clear roads.

Houston Mayor Sylvester Turner said some warming centers in his cities had to be shut down because those locations lost power.

The severe cold was also causing problems for the state’s coronavirus vaccine distribution efforts. State health officials said Texas, which was set to receive more than 400,000 vaccine doses this week, now does not expect deliveries to occur until at least Wednesday.

The Texas Department of Transportation said Monday that nearly every roadway in North Texas had some snow accumulation after Sunday’s storm.

Crews worked Monday to treat icy patches and plow, but TxDOT strongly discouraged people from hitting the streets and warned that traffic signals could be affected by power outages.

“Use caution at these intersections, and treat them as a four-way stop until power is restored,” TxDOT said in a written statement.

DART buses, which were running on a Saturday schedule, suspended service Monday afternoon because of “deteriorating road conditions” across the region and were expected to resume service Tuesday morning.

Trinity Railway Express service was suspended from Monday night through Thursday morning. The Dallas streetcar was not running while DART operating on a winter-weather plan.

Staff writer Kyle Arnold and The Associated Press contributed to this report.

Coronavirus: What’s happening in Canada and around the world Wednesday

Alaska makes Covid vaccinations available to anyone 16 or older